O.k. first of all, a 14 h drive from our little hometown called Thun to the lovely Surf Coast of the southern west of France isn’t a walk in the park on a sunny Sunday morning.

But after several coffees, 2 police stops (we didn’t get arrested tough but what you’d expect with a black car, tanned windows and three tattooed lads in it…) we made it to the Element Called Water Surf & Skate Guesthouse in Soustons.

The word guesthouse is a quite underrated as it is more like a camping ground, built by hand and heart, blood sweat and tears from the dedicated crew down there.

There is indeed a lovely guesthouse as well with several bedrooms and a cozy fire pit. Also you can choose to stay in one of their cute bungalows, simply bring your tent or even sleep in the camper or car.

When we arrived around 11pm the bar and the outside area were in full motion and the crew even gifted us with food leftovers from the dinner they had a bit earlier.

Filled with delicious food we enjoied a couple of beers before we went to bed happy.

While people already went for an early morning surf, the sun arose and filled us up with a nice warmth.

For the Floating Art Tattoo Week we’d set up our little „Studio“ in a corner of the bar / chill out / mini ramp area.

People got really excited and first ideas for Tattoos came up shortly ever after a couple of drinks the first evening.

The main event was set for Wednesday as a „Tricks for Tattoos“ skate contest (the Handbuilt manmade skate pool by the Portland Crew is pretty sick btw). Over 70 people showed up for the skate jam, took advantage of the huge BBQ and observed the Skateboarders ripping themselves apart for 3 free Tattoos.

Sweaty and excited the Tattoo Session was soon in full motion and everybody was in a good mood as the night went by.

There was a good demand of getting a forever lasting memory so Juan did 16 Tattoos over the week.

Because we loved this place so much we decided to extend our stay for one more night and leave on Monday instead of Sunday morning. So Saturday night we took full advantage and went for dinner and drinks at the Coolin Bar in Hossegor where, funny enough, they hosted an event called „Tattoo Pong“ run by the guys of the local Tattoo Shop named Asylum Tattoo.

As we played who’s gonna get a spontanious Tattoo, Juan won the game and had to put his ankle on the Tattoo Table.

Almost forcing us to not leave early on Monday morning, because the waves were supposed to be super good we didn't leave Soustons before 11am... It was worth it!!

We definately had an amazing time bringing our little Tattoo Vision to France and can’t give enough thanks to the Crew at ECW for taking very good care of us! And of course thank to all the people who showed up and got hyped about what we’re doing! 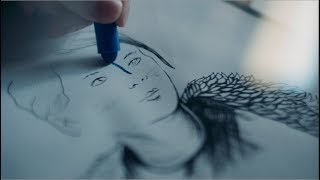